Very few people are excited to have a surgical procedure and it is very normal to be a little fearful. It’s funny that we are more accepting to have something cut out of our body rather than something placed into it. It is better to have a small titanium spacer placed into your foot than to undergo irreversible bone and joint surgery.

Interestingly, the insertion of HyProCure is considered a “soft-tissue” procedure because only the soft tissues are cut during the procedure. There is no drilling or bone surgery, the exception is when there a partial fusion between the ankle and heel bones that has to be removed.

What are the steps of the surgery?

Once your surgeon makes sure the area around the cut is completely numb, a small cut is made below the outer ankle bone. There should be a minimal amount of bleeding. An opening is made into the area of the sinus tarsi space. Small scissors are used to cut the tissues deep in the space. This is very important because those tissues will heal around the anchoring portion of HyProCure. There are a variety of trial sizers that will be inserted into the space to figure out what size HyProCure provides the best correction for your foot. HyProCure is pushed into the space. Once the surgeon is happy with the position of HyProCure and the correction, a few stitches will be used to close the cut. A dry, sterile bandage will be applied to the foot.

How long does it take?

The actual time to insert the HyProCure spacer from the initial cut to last stitch can vary from patient to patient. The usual time is about 20 to 30 minutes, sometimes it doesn’t even take that long.

Where will the procedure take place?

Many patients have had the HyProCure spacer placed into their foot just in the doctor’s office. There are many deciding factors that will be discussed between you and your foot surgeon to determine where would be the ideal facility to have HyProCure placed. It also depends if your situation requires additional procedures to correct other parts of your foot.

How painful is the procedure?

We want this to be as painless as possible. It can be performed as a “local only” procedure where the numbing medication/local anesthetic is placed into the sinus tarsi space. This is the easiest place on your foot to have an injection. It feels like a light bee sting at first and quickly goes away. Many times, the surgeon will have an anesthesiologist/nurse anesthetist give some medicine in the IV and you take a little nap and don’t feel or remember anything. You will still get the same injection into your foot before the start of the procedure. Other times it may be necessary to give a stronger form of anesthesia.

Where is the cut?

A small cut is made just below the outer ankle bone within the skin lines. How small is the cut? It varies from surgeon to surgeon but it should be less than 1 inch at most. 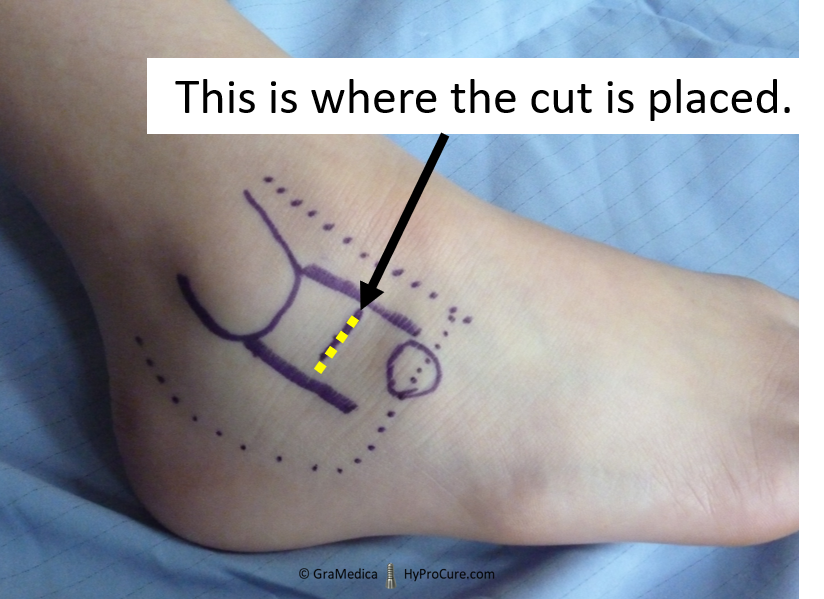 What kind of bandage will I have on my foot?

If the insertion of HyProCure is your only procedure, then you would expect just a standard dressing wrapped in an elastic bandage. Every surgeon will have their own bandaging techniques.

Do I need to have a cast on my ankle?

This is up to your surgeon. Most times no cast or brace is required after surgery. However, there are situations when a surgeon will place a temporary cast or walking brace.

How big is the scar?

Everyone scars differently but you should expect a scar because a cut was made. Your surgeon will do their best to make it as minimal as possible.

How soon can I walk after the procedure?

This can only be answered by your surgeon. It is possible to stand on your foot immediately after the procedure if HyProCure was the only procedure. You don’t “walk” on HyProCure. There will be a minimal force acting on HyProCure but the majority of forces are relocated back on the heel and arch bones. It is possible to dislodge HyProCure if you walk too much during the initial recovery period.

Some surgeons will recommend a certain amount of time of no weight on your foot. They will want you to use crutches. Other times you could be allowed to walk on your foot to tolerance.

How long do I have to wait to start running?

Only your surgeon will be able to give you permission to start running because everyone has a different set of circumstances. It is important to wait at least 8 weeks. This is to allow plenty of time for the tissues to attach to the cylindrical portion of HyProCure. This anchors it within the sinus tarsi.

Is there a chance HyProCure will displace?

Yes, there is always a chance this can happen. It has to do with many different factors. A big factor is the quality and thickness of the tissues within the sinus tarsi space to attach to HyProCure. Are there any unusual surface anatomy variances that compromise the results of HyProCure? Are there are misaligned, unstable bones in the foot? Were both feet fixed? If one foot is untreated, the ankle bone alignment is not addressed, which will compromise the results of HyProCure.

You can pretty much expect that HyProCure will shift slightly from its initial placement during the procedure because HyProCure is inserted into your foot while you are laying down. Once you step and walk on your feet, HyProCure will find its final position. It will seek its own position within the sinus tarsi where it will function the best. Every HyProCure implant will be positioned differently, from one foot to the next. Some will sit very deep, others more superficial. Some are oriented very oblique and others are less oblique. It all depends on the alignment-orientation of the sinus tarsi canal.

If the HyProCure spacer is placed into a child’s foot, will it need to be replaced once they become an adult?

It would make sense that due to the smaller size of the child’s foot that they will need to have a different size placed when they become an adult, but this is not the case. The sizes are for both children and adults. What we know is that there are two common sizes for adults; these are typically the same sizes placed into a child’s foot. That tells us the sinus tarsi diameter is formed once the child had their 3rd birthday. Of course, there is no guarantee that a resizing will never happen, it is just unlikely. If HyProCure had to be removed and replaced with a different size later in life, that is still an option and one of the many advantages of HyProCure.

Should I have HyProCure placed into both feet at the same time?

The problem with having HyProCure placed into both feet at the same time is that you don’t have one “good” foot to walk on. Your natural tendency will be to walk on the outer sides of your feet. This abnormal walking can occur for several weeks to months. It places uneven pressure between the ankle and heel bones and can force one of the HyProCure devices to become displaced to a point where it has to be surgically reinserted. Having HyProCure place into both feet will lead to a much longer recovery and a greater potential for one of the spacers to become displaced.

Are there any limitations to sports activity after HyProCure is placed into your foot?

Once full recovery has been reached and both feet have been internally fixed with HyProCure, then you should be able to participate in any sport of your choosing. There are guarantees but there are people of all levels of sporting activity from marathon runners, MMA fighters, basketball, football, volleyball, etc. that have HyProCure in their feet. Many athletes find that they can run faster and jump higher because their feet are realigned. This makes sense because the muscles don’t have to work as much.

Are there any shoe type limitations after HyProCure is placed?

You are expected to wear any shoe type that you did before HyProCure or even a greater variety of shoes. Yes, you can wear high-heeled shoes.

Will I still need to wear an arch support or foot orthotic after HyProCure?

Should I expected HyProCure to be in my foot temporarily or permanently?

HyProCure acts like a stent in a blood vessel to keep it open. We would assume that if HyProCure is removed, the ankle bone will eventually lose its alignment and stability. There are no studies to show the number of people who keep the correction of their ankle bone alignment and how long. Some studies claim the correction stays after the spacer is removed but there are no long-term studies. The goal is to keep HyProCure in place long enough for any other diseased tissues to heal.

There are no known studies to show what happens after HyProCure has been in your foot for an entire lifetime, but we know what can happen after a lifetime of walking on a foot with ankle bone instability. It is better to have HyProCure in your foot than to walk with your ankle bone partially dislocating with every step you take.

If I have a problem with HyProCure can it be removed?

That is an important question and one of the great advantages of HyProCure. There are many different types of implants that are placed in the bone and that can also be removed. HyProCure is the same. It is only held in place by the bony chamber forming the sinus tarsi and the soft tissues within the space that attach to it. To remove HyProCure, the surgeon will make the same cut, reach the implant, twist it 360 degrees to remove the soft tissue attachment, and pull HyProCure out of the space.

Are there any known complications of having HyProCure in place for a long time?

What is more important to know is what would happen if the ankle bone instability is not fixed. Excessive forces are acting on the bones, joints, ligaments, tendons, muscles, and nerves of the feet, knees, hips, and back. The benefits of HyProCure far outweigh any of the risks.

One would assume that there would be changes deep within the ankle bone where it comes into contact with HyProCure. This is called “stress shielding” and this can happen anywhere in the body where an implant is placed. The bone tissue there will strengthen to make the bone stronger. There have not been any reported situations where the HyProCure spacer becomes pushed into the ankle or heel bones. There have been no reports of a broken ankle or heel bone as a result of HyProCure being in the sinus tarsi space.